The Castle : its history

16th century residence
in the heart of Limousin

The longer we live here the more mysteries we discover about the Château.
We had previously thought that the Chateau was completed sometime between 1642 and 1656, during the reign of Louis XIII, , but have since been told by an architectural historian that it may be even older. The back plate (a beautiful huge ironwork plate bearing a coat of arms, used to retain heat in the main fireplace) is dated 1588, but may have been brought from the family’s previous residence. The Château and estate would have been either a gift as recognition of a favour to the Royal House or to seal an allegiance.
Given the strategic importance the area has always held (the theatre of war and political machinations for the struggle for the French and English Crowns), the latter seems likely, especially as a strong political role has often been held by the incumbent family. The estate originally covered some 150 hectares, making it extremely wealthy, and self sufficient until the mid 20th Century. The Lord of Ribagnac, head of the Igonin family, is buried in the church at Ambazac, and his family continued to prosper at Ribagnac until 1860 when the Chateau was sold to the Alluaud family. The Chateau underwent refurbishment during the 1780s until the Revolution intervened at the cost of the Igonin family.
The original building was larger than it is today, with a wing protruding from where the square tower now stands, to form a courtyard. There was also once a fountain, which we dream of reinstating one day. There appears to have been a fire that destroyed this section, but we still do not know the details.
The Chateau takes its name from the underground river running through the land, the Bagnac with the addition of the word for stream, “ruisseau” or “ru”. It was at one time Chateau de Rubagnac, but this has been corrupted over the passage of time.
The new owner was well connected (his father was the Mayor of Limoges) and became very successful in the booming porcelain industry; you can still see the remnants of the porcelain kilns used to try out new designs in the Summer Pavilion. The family, being creative, also fostered connections with the art world, and regularly entertained artists at the Chateau. The Summer Pavilion was often used as an artist’s studio for visiting masters.
Jean-Baptiste Camille Corot, 1796-1875 (the leading French landscape painter of the 19th century) was a frequent guest to the Chateau, and the paintings in the Honeymoon Suite, the silvery woodland scenes (the trumeau and the matching two panels) have in the past been attributed to him. This is doubtful but they are certainly part of his school of painting.
The family were particularly interested in Impressionist art as well as more traditional schools.
The Chateau underwent a renovation in the 1860s, and some of the furniture and chandeliers in the Chateau date from then (although some are much older). It was at this time that the arboretum was planted with many rare and beautiful trees; sadly many of these were lost in the hurricane of 1999 that devastated much of France. However, we the present owners are now working to restore the woods, and the woodland here is still the home of ancient deer, wild boar, stone martens and many other creatures and an idyllic place to wander.

The Chateau next changed hands in 1903, and was redecorated at that time (the Grand Suite). The de Saulieu O’Toole family moved in and a beautiful stained glass window, made by a maître verrier still bears the family’s coat of arms. We know little else about this period but that the Chateau was again sold in the 1930s to the Lacaze-Masmonteil family. 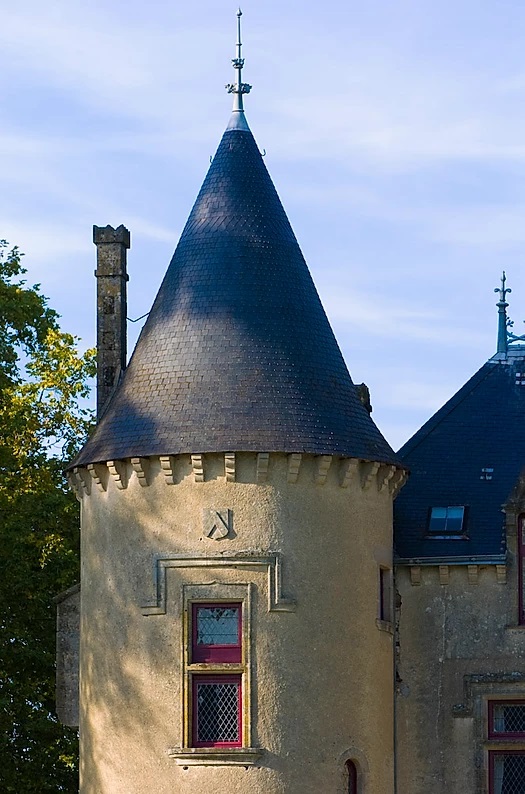 The Lacaze family lived at the Chateau permanently until Madame Lacaze (senior) died in 2000. Her husband had been a famous surgeon with his own clinic in Paris, and had used the airstrip to the rear of the chateau to fly to Paris, until the airstrip was destroyed by the Germans during the Second World War. The Château was never occupied by the Germans, and so was able to retain many of its original treasures.

Although it is unconfirmed, local legend has it that the Chateau was used as a secret Resistance hospital during the World War II. During our renovations, we discovered hidden fragments of wartime newspapers (behind the fabric wallpaper) showing lists of soldiers names, and also provisions hidden in the roof space. More significantly we discovered a reinforced ceiling in one of the larger towers that could have been used as a secret room, as it had a hidden entrance from the roof space. Most of all, everybody we have met here speaks of Madame Lacaze with a kind of warmth and awe that makes one think she was the type of person who did something special in her life.

In the summer of 2005, we received a visit from a kindly old gentleman, who was visiting the area with his son. It turned out that he had been a prisoner of war here during the Second World War and had been “held” at one of the Château’s farm buildings as a worker, after having been wounded in Russia. He told us that after the war he had elected to stay on as a worker and later married a local girl. He said that his time at Ribagnac had been one of the happiest periods of his life.

We are currently working towards finding out more about the Chateau’s history.

In 2005 we participated for the first time in the annual heritage weekend held in France, the Journées du Patrimoine. The Château had never before been open to the public and we received hundreds and hundreds of visitors

We purchased Chateau Ribagnac in 2003, and our family is only the fourth to own it. It has been traditionally owned by master porcelainiers, who enjoyed being at the epicentre of their trade, and so kept the chateau beautiful for their families. However, it was last decorated in 1902 and the interior is Napoleon III, it having last been renovated at the turn of the eighteenth century.

This means we have had to work hard to retain and renew as much as possible so that the Chateau’s character can shine through. We have endeavoured to keep the style classic and simple but with a twist of our own, which we hope you will enjoy.

We have searched far and wide to find the most appropriate furnishing for the Chateau whilst retaining as much of the original furniture as possible, and have enjoyed perfecting our vision of the most comfortable, lovely and stylish interiors.